Sy as usual had me up all night with his snoring (no more beers for you matey!). I got up at 7am and watched some tv. Got dressed and went for breakfast in the lounge for 8am. The lounge was super busy so we decided to bring breakfast back to our room.

I decorated our window with some stickers we brought over. 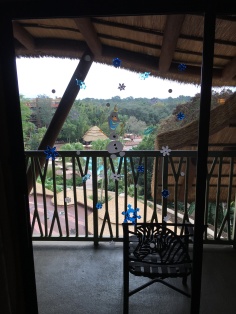 We planned a pool day but it was a bit chilly and drizzly that morning, we went out to watch the flamingoes being fed. Erm. Well it wasn’t that interesting, I was expecting them to give a little talk but no they just put the food out. And the food really stank Hahahaha. We watched them eat for a bit and then went looking at the other animals.

We periscoped a bit but when the rain started to get heavier we decided to call it a day and ran for shelter.

We stopped by the lounge and grabbed some drinks and went back to the room. As it was empty I made the most of it and took a million pictures. 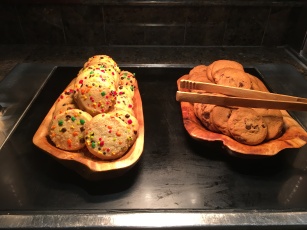 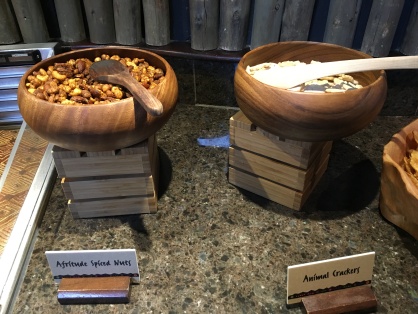 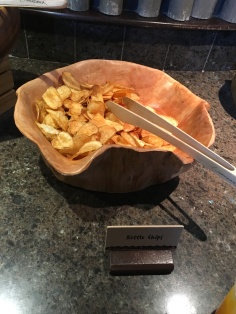 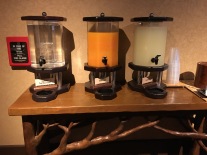 Sy went back to sleep as soon as we got back to the room lol I watched some tv and chatted to a few people back home.

It was still raining so I made an adr for lunch at Sanaa so we didn’t have to go far.

Sy woke up from his nap at 12:30 and so went over to Kidani. The clouds had now disappeared so we decided to walk over and make the most of the sunshine.

We were early for our adr so we went out to see the animals and chatted with the CM there. We grabbed a seat in the sunshine and sat watching the animals for a while.

We then went for a quick mooch around the shop. Its a tiny shop so it didn’t take long, one thing I did love was this cute thanksgiving tree outside where people could write what they were thankful for and hang it on there. 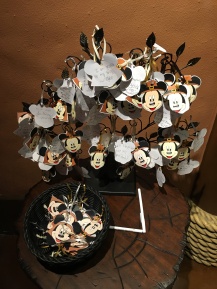 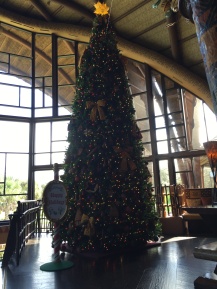 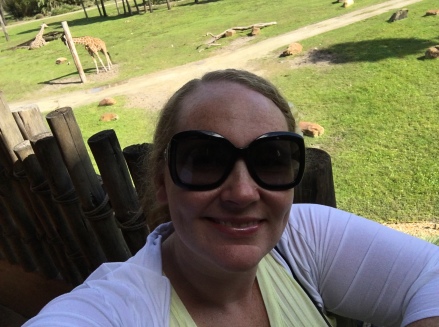 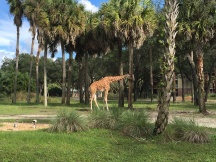 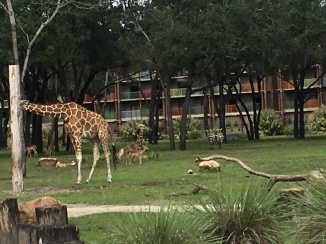 When I was in Disneyland Paris for dapper day I had met an American girl who worked at WDW part time, she was working that morning and messaged me to say she would be up for meeting so I had added her to our adr. She came over just as I was checking us in, perfect timing!

Lunch was of course amazing – it’s Sanaa! Service was okay. We got the bread service to start and then Sy and I shared the curries while moe had the peri peri chicken burger. I think I might actually go for that next time as it looked lush!

We chatted with Moe over lunch, she had been working over at Ohana and turns out she met our friend Lea and Luas at breakfast! Moe is good friends with some right characters over there 😉

Moe was able to use her 40% cm discount for lunch so it only came to $50inc tip for the 3 of us, which we paid as a thanks for using her discount.

We headed out front and chatted for a bit longer before Moe had to hit the road, she was heading home to Atlanta (she had come down to work for a few days).

We said goodbye and decided to get the shuttle back over to Jambo as the clouds were now back and knowing our luck we’d get half way and end up soaked. The shuttle took a little while to come so we chatted with a lovely cm out front who’s name I didn’t get but she was from the Netherlands. She was soooo lovely.

Shuttle arrived just as the rain started – good call waiting. Back at Jambo we went in and met up in the lobby with Lea and Luas. We grabbed some pics in front of the tree.

We went up to the lounge and asked if it would be ok for Lea and Luas to sit with us in there as it was empty, they said it was fine cause there was no one there. We chatted for ages.

I disappeared off to speak to the cast member who checked us in (Andrea), as were checking Into a value studio after our club level stay, the value rooms can be any view, savanna, pool or car park. I asked her if she would make a note on the reservation for us to go into a savanna view if possible, well she went one better than that and put us into one and locked us into it so we couldn’t be moved! Yay! I stayed chatting with her for a few mins and we got onto the subject of British chocolates and how much she loved them, we had brought over a massive box of them for the club level staff as they aren’t allowed to accept tips. As we were talking about them I told Andrea and went to get them from our room. You’d have thought I’d given them $1000, they were SO happy. I felt all warm and fuzzy inside ❤

I went back to chat with Lea and Luas and we showed them our room, in the room I noticed our first ever towel animal! (I’d missed it when I ran to get the chocolates before cause I was rushing). Cute little mouse.

We then went for a wander round the resort to see the animals and Luas played in the playground. We stayed out as long as we could but the rain started to get heavier again so we had to come back inside.

We watched some flamingoes getting rather friendly, the poor girl just buried her head in the water and pretended it wasn’t happening hahahaha 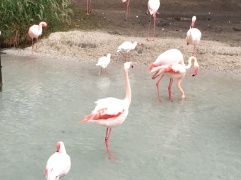 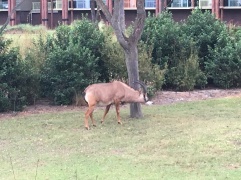 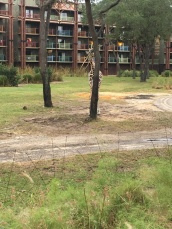 We came back up the room and it had been turned down already, I’d not put any money or chocolates out! Its ok, I put more the next day 😉 We also had this little beauty left next to the bed!! 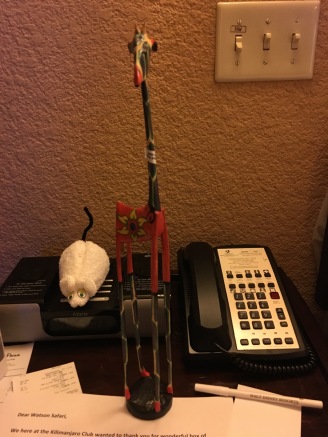 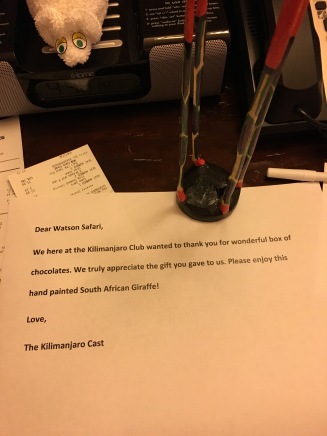 Honestly I was so blown away I cried a little ❤ I went to the desk to say thank you. Andrea said she had looked to see if they had anything dancing related. How sweet that she remembered and tried to find something for us.

I grabbed my handbag and we headed off to Disney Springs. We gave Lea and Luas a lift as they wanted to do some shopping and we were going to meet up with Claire who we know from back home.

We parked in the new parking garage on level 5, it felt like a long way to get to marketplace. We mooches about the shops for a bit but I felt rubbish 😦 boo. We said goodbye to Lea and Luas and headed to the Lego shop to say hello to Claire, we didn’t stay for long (and I forgot to get a pic dammit), they were off to meet Santa soon! Plus I felt poorly.

We headed back to the car slowly. The Christmas decorations were starting to go up.

Sy was feeling hungry so we decided to go to steak and shake at the crossroads. We decided to eat in. Sy went for 4 sliders which he said were decidedly disappointing. I had some chicken tenders and we got some onion rings to share. Both had soft drinks and it came to $16 inc tip. Crazy cheap!

Sorry I had eaten some of mine before I remembered to take a pic. 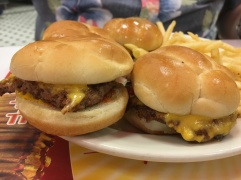 We left and headed back to the hotel. I still wasn’t feeling well so Sy went to the lounge to get a dessert on his own while I got ready for bed. I was asleep by 9:30pm. I woke up at 11:45 and Sy was still awake watching tv. I went right back to sleep though and didn’t wake up till the next morning. 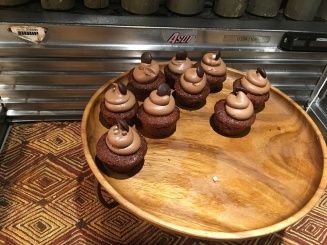