The alarm went off at 8am and we dragged ourselves out of bed. Today we were heading to the Magic Kingdom for a Dapper Darling event (an offshoot of Dapper Day) called ‘on Wednesdays we wear pink’. Sy hopped in the shower as I started to get ready, there was no hanging around this morning. After the crowd pictures from yesterday we were planning to get there with plenty of time to park and get through security.

As soon as we were ready to go we grabbed a couple of croissants from the lounge and ate them on the go in the car, trying not to drop crumbs all over us and failing miserably! In another attempt to avoid some of the crowds we decided to valet park at the Grand Floridian, we weren’t 100% sure we would be allowed so we asked at the gate and were told its fine as long as we valet and don’t self park. It took no time at all to valet and we even still had enough time to take some pics around the lobby.

Once finished posing we hopped on the monorail. 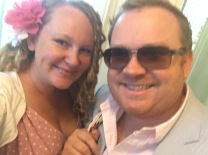 We walked into MK at 9:45 after no queue whatsoever at bag check! Whoa, this was not what we were expecting. Still early for the meet so we went to take more pictures up at the train station. (Cue more posing! In fact just prepare for a lot of posey pics all day haha) 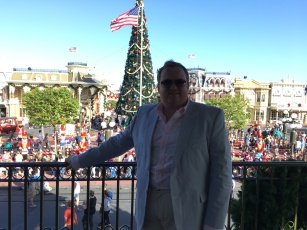 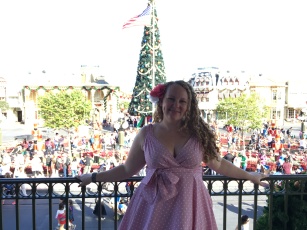 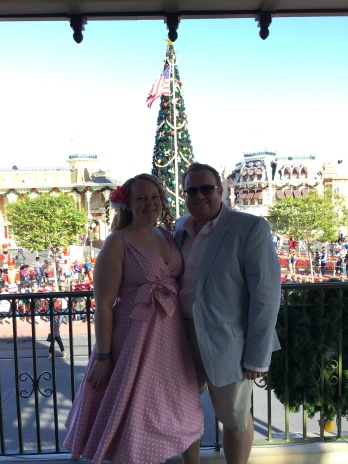 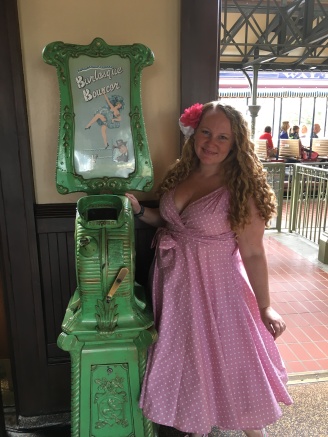 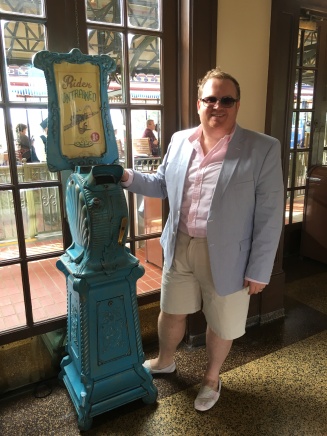 This was actually not posed…

We then hopped on the train and went all the way around the park 🙂 it was closed the last time we were both here. Love a ride on the train.

When we arrived back we could see other people dressed in pink so we went over to say hello. There were clearly a lot of people who already knew each other so we seemed to make friends with people who’s first time it was like us. When we arrived we all had to sing the Bing Bong song to the organiser to get a little badge, I had literally no idea what the song was until someone else sang it lol (shameful really as I have actually seen inside out!)

Who’s your friend who likes to play

His rocket makes you yell “Hooray!”

Who’s the best in every way, and wants to sing this song to say

I felt a right plonker singing it on my own!! Sy was literally no help. And there didn’t seem to be an option to opt out and not have a badge haha.

We had little challenges set out for us for the day, actually that’s not strictly true… We had a LOT of challenges set out for us for the day. We quickly decided we weren’t going to be able to do them all, they seemed quite intensive and we wanted to just enjoy the day. I did feel a bit bad as the organiser Marina had clearly put a lot of effort into them all, there were just too many of them for newbies like us. We decided to skip the Sorcerers of the Magic Kingdom challenge where we had to try to get all of the pink cards by swapping them with people in the park, and the one where we had to try to find one of the other members of the group all day and get pics with them (as that would mean being on our phones all day looking for where they were going to be). The ones we decided to do were get loads of autographs in with pink pens and try to get a ‘Mean Girls’ inspired pic.

We had some pictures taken before we were ushered off to get on with the challenges. 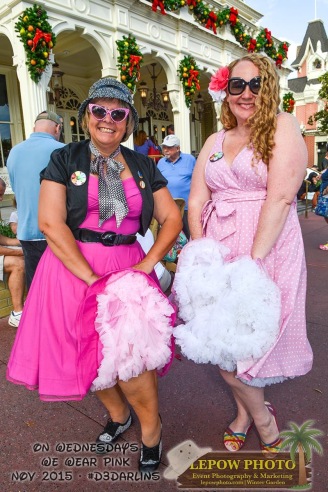 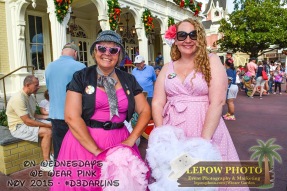 We had been chatting to other newbies Lorraine, Liz and Nicole. Liz and Nicole were friends and had come together but Lorraine had braved it and come on her own! We quickly decided we would hang out together.

As I said one of the challenges was to take a picture in one of the Mean Girl poses, the most liked picture on Dapper Darling Facebook page would be the winner. So being tactical we wanted to get our picture up asap so we could get as many likes as possible. There was a cast member standing nearby who said hello to us, asked if we were having a nice day, he was really sweet and offered to take a picture for us.

As we went to say thank you to the CM I spotted his name badge and that he was French, hmmmm…. I was friends with a French CM working in WDW on Facebook. I knew him through another friend who had asked me to bring a few things over for him. His name was slightly different from the one on Facebook though, and he was really tall and for some reason I thought the guy I was bringing the stuff for was really short. Also my friend said he was working in Epcot in the France pavilion. But turns out it was him! I asked him if we were friends on Facebook and he said yes he thinks so, that’s why he was hanging around us as he thought he recognised me haha.

He was such a sweetie and we hung out with him more later in the trip. He offered us a couple of Fastpasses each to use that day too, how lovely was that?!

We chatted for a few minutes and then we headed off towards Anna and Elsa as Lorraine being a local could never get Fastpasses for them so we could make the most of those extra Fastpasses from Louis. Liz and Nicole had an ADR lunch at Be Our Guest so we agreed to meet up once they had finished.

We decided to ride the carousel next as it would be a perfect photo opportunity. Half way through the wait it started to rain and we got a bit wet! It cleared up again soon after without us getting soaked though, phew!

After we decided to ride the Dwarves Mine Train, again as Lorraine can never get a Fastpass, not that we minded! Love that ride. 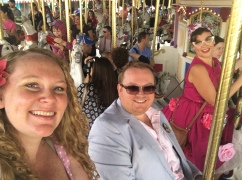 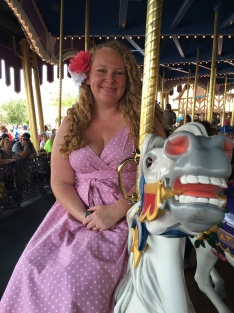 We then went to wait for Gaston, we thought he might be good for getting a mean girl picture. We had a little wait, he was out on a break and yet there was still a massive queue. While we were there a girl CM came by to say hello, she’s a Dapper Darling but she had to work that day. Was lovely to chat to her, she told us about a dress she’s making for the official Dapper Day in spring. Liz and Nicole finished their lunch soon after came to meet us in the queue.

Gaston was of course a total hoot. He loved all the women around him 😉 we asked him if he would take a picture standing out front flexing his muscles while we stand behind, I don’t think he expected us to pull faces of disdain though, think he was hoping we would all faint at his beauty hahaha

It was then time to meet up in front of the castle for pictures. We had to wait for ages as they wanted to get the end of the Dream Along With Mickey show to get the fireworks in the background. It was soooooo hot stood in the sun waiting. To kill some time they asked me to stand out front and twirl (they loved my shoes!).

Finally got the fireworks pic

Feet were now killing so i had to swap to my comfy crocs, not quite as pretty lol. The group was breaking up again for more challenges. Liz and Nicole headed off home now. Still feeling pretty hot and icky we decided to go ride the peoplemover for the breeze. And then into Monsters inc for the aircon 😉

We then decided to call it a day as well, my feet were hurting hehe. We headed back over to GF via the boat.

We stopped for yet more pictures and to see the Gingerbread house in more detail (we didn’t really stop by for long this morning) got the resort boat over.

Some pics of the lobby and gingerbread house.

(looks like I’ve got my own beast in these pics haha… Seriously Sy, get a shave!) 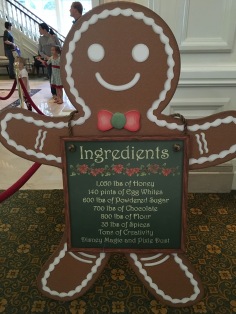 Back at the hotel we got changed and headed to the club lounge. We got another little friend left for us in the room – how amazing?!?!?!!

In the lounge we chatted for ages with Andrea and gave her some more chocolates we had brought over for mousekeeping (we still had enough).

We got some apps in the lounge, I was not a fan of today’s offerings. 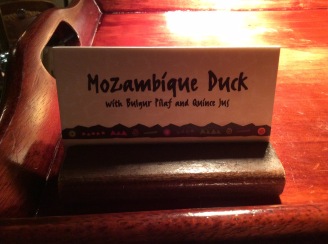 We then went to the room and chatted our parents back home. I promptly fell asleep for half an hour – oops! Must have been tired haha. We hadn’t had much to eat all day so we decided we should go out for some dinner. We ended up getting what turned out to be a rather disappointing Wendy’s as it was nearby and we were both shattered.

Back to the hotel and pretty much fell into bed.