There was no lazing about today we had to get up and get going – we had places to be! The alarm went off at 7am and we quickly showered and got dressed. We left the hotel at 8:15, we were due to meet Carrie, Mark and Mark’s sister Katherine and her partner at 9:30 in Blue Springs state park. We were booked on the 10am boat trip 🙂

We were hungry and no more club level (or so we thought…) so we decided to stop for an expensive McDonald’s – expensive cause apparently the McDonald’s on Disney property is more expensive than going to one offsite, being out of towner’s we had no clue until someone pointed it out to us haha. We had places to be though so we just thought to hell with it and paid the extra few cents for convenience. I went for an egg mcmuffin and Sy got a mcgriddle (we can’t get either of these in the uk!). Sy quickly scoffed his down and got back to driving, while i having never been a fan of indigestion ate a little more slowly (I guess it also helped that I didn’t have to do the driving so there was no real rush).

We arrived at the park dead on 9:30 and parked up. Carrie and Mark were in the car in front of us for the last few miles but we didn’t realise, as we went to pay for parking the attendant told us they had paid for our parking too! How lovely ❤

First up we went to pick up the boat tickets which were $20 each, we then had a bit of time to kill so we wandered up the river looking at manatees <3<3 amazing!

Mark’s favourite sign, no fish allowed in the river haha

We boarded the boat at about 9:50, we were the youngest on there other than toddlers with their grandparents hehe. I guess with some of the worlds best theme parks on the doorstep people our age just weren’t interested in seeing the natural beauty Florida has to offer! We saw so much wildlife, though there does come a time when you’ve seen enough birds I must admit. Sadly we only saw 2 manatees from the boat but it didn’t matter. I took a million pictures so get comfy… 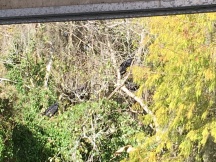 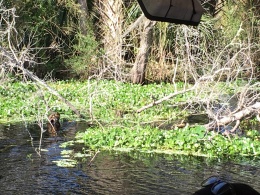 I was starting to get a headache while we were on the boat and hadn’t brought any pain killers 😦 luckily Katherine had some she shared with me which really helped.

If you’d ask me I’d say the boat trip was just half an hour too long, the kids (and I) started to get a bit restless in that last half hour haha, I’d totally do it again though – loved seeing all the animals and the beautiful scenery.

12 pm arrived and we hopped off the boat, we walked along the water trying to look for more manatee. We went up to where you get into the springs but it was closed off at this time of year due to the manatees coming in.

There was a cute little shop that we had a look around, they sold supplies for people who were camping at the park as well – smore kits etc, all the essentials hahahahaha I can’t imagine an American camping trip is complete without smores! (Another thing we don’t have in the uk at all).

We the headed back to the cars and went in search of some food. Carrie and Mark new of a great bbq place nearby called Sonny’s so we made our way there.

The heavens opened just as we arrived so we had to run inside trying to not get too wet. eeeep!

Sonny’s didn’t look much when we first walked in, everything was pretty wipe clean

but the food spoke for itself! I decided to get a smaller plate from the lunch menu (smaller, ha!) while Sy got a normal sized meal and for 2 meals and 2 drinks our total including tax and generous tip was $33! Total bargain!

Possibly the worlds largest drink cups. I’m not sure the picture does it full justice… It was so big I couldn’t pick it up in one hand!

I had pulled chicken, garlic bread, baked potato and Mac and cheese. 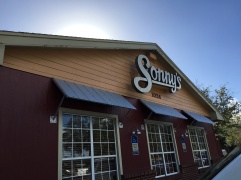 The food, wow. This is one place I cannot wait to go back to! We both LOVED it. I wanna have the exact same thing when we go back.

We paid the bill and made our way outside, the rain had all gone and it was sunny again now!

We said goodbye and set the satnav to AKL, it was about 45 min easy drive down the I4.

We got back to the room and were surprised that it had been cleaned? We were normal DVC now so room clean is every 4th day. Hmmm. We chilled in the room for a bit before heading downstairs to see the animals… We walked past the stairway up to the club lounge and tried our magic bands…. They still worked :-O so of course we popped up… Be rude not to right?! We went to the desk to see Andrea and mentioned about our bands still working, she said they had been activated for the rest of our stay by Mickey Mouse hehe she was confused about the room clean though, she had a look at our reservation and couldn’t see why other than that there was a problem with our bands yesterday (Mickey had likely been fiddling with them). We couldn’t believe it. We had club level access for the rest of our stay! :-O o.m.g! We never did make it down to see the animals that afternoon lol.

We stayed and chatting with Andrea and Brian for a little while and grabbed some drinks. It then hit appetiser time! Woohoo lol who knew we still had room for more food haha. Tonight was spiced butter turkey, lush!!

Back in the room we have some visitors 🙂 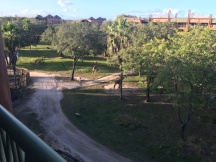 We were meeting Carrie, Mark etc over at Bay Lake Tower at 7:30 to watch the fireworks so we got changed and made our way over. We arrived at the same time again and headed up to the lounge.

Carrie had been saving herself for some of the famous 7 layer chocolate cake. That is some amazing looking cake! :-O she’d tried one bite of someone else’s a while back and promised herself she would buy it once so she did 🙂 it was surprisingly light for a big chocolate cake, but as I’m not a huge chocolate lover it was wasted on me (I had to try some though, naturally).

We went outside just before the fireworks started, it was quite chilly again tonight but this time we had come a little more prepared with jumpers and scarves 😉 Abby and Kev had been in Disney springs watching La Nouba with family, they came over to watch the fireworks and arrived just after they started.

After the fireworks we headed back inside to the warm, we chatted for a while before Carrie and Mark had to leave, Mark’s sister and brother in law were flying home the next day 😦 boohoo! We stayed for a while longer though and chatted with Abby and Kev, can’t believe they were so close to Disney but had no actual tickets to go in the parks! Soooo harsh. Don’t think I could do it lol but it was so nice to see them and their family. We finally left at about 10:30pm.

We headed back to AKL but instead of Jambo house we were making our way to Kidani as our friend Jen was staying over there. We had hoped to meet up before now but we couldn’t make it work, and tonight was their last night 😦 so of course we had to swing by and say hello! Couldn’t be that close and miss the opportunity! We chatted in the lobby for about half hour – 45mins, but it was late and we were all shattered.

We said goodbye and then drove back over to Jambo. There were giraffes right outside our balcony 🙂

I was starving so we decided to make up sandwiches from the thanksgiving leftovers, they were LUSH. We ate them in bed at 12:30 hehehe