We were forced into taking it easier today, mainly due to me still feeling poorly 😔 so we decided to meet up with Louis again and hit Disney Springs for a look around the new areas and to do some last minute shopping.

Most of the new stuff was almost there but not quite ready to open. Sy took plenty of pictures of the construction – he loves all that stuff coming from an architecture background. 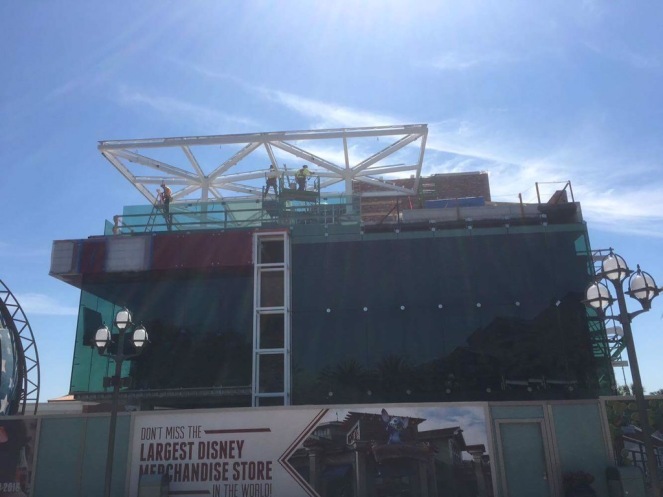 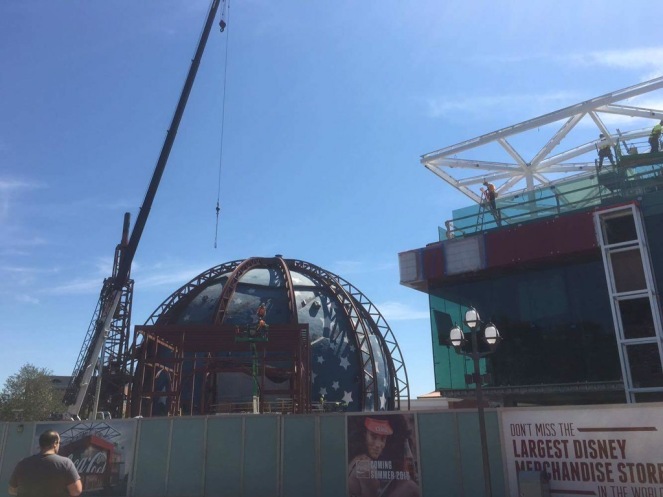 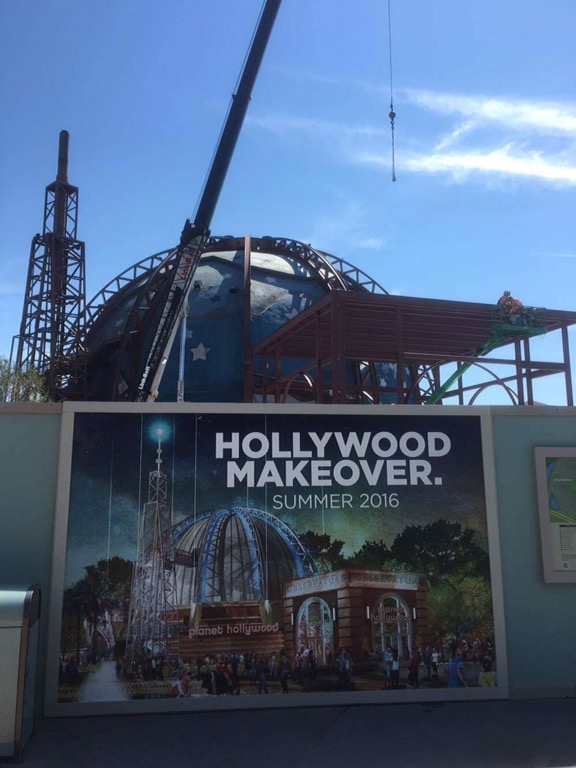 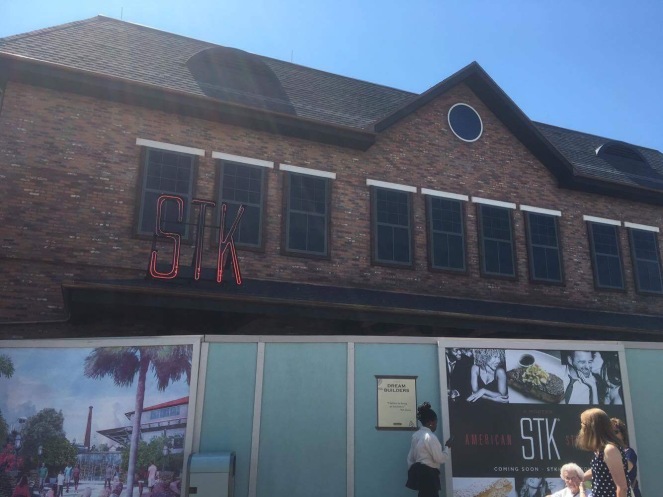 Sy and Louis grabbed a Starbucks while I went in to World of Disney, they met up with me inside when I was just about ready to head to the checkout. Perfect timing hubby 😂
Sitting in the coop 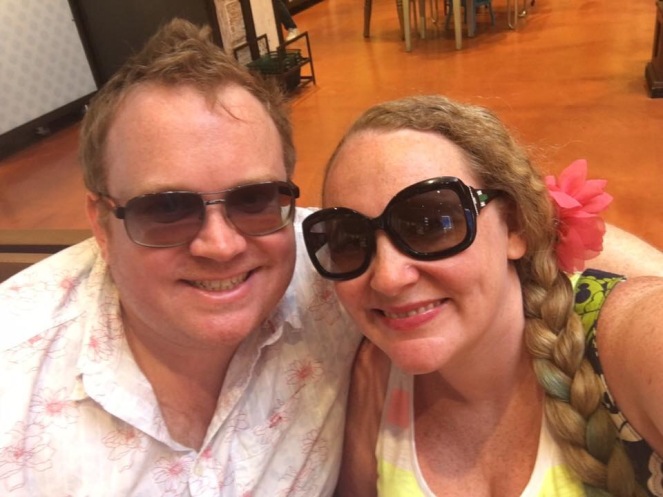 Afterwards we dropped Louis back home as he was working tonight and made our way to the Boardwalk, picking up Ali on the way.

We dumped the shopping in the room then Ali and I went to sit by the pool. We grabbed a couple of cocktails and got a quite spot in the sunshine to soak up some rays 😍

Sy went to try and get his new magic band sorted – it was faulty and he was trying to get it changed but not having much luck. He came back after a short while and went for a dip in the pool.

Ali was off to meet up with some friends to see Hoop De Doo tonight so she hopped off there when we went back to the room leaving Simon and into get ready for dinner. Tonight we were meeting up with Disney Foodies creator Randy and his fiancé Marranda, we were off to a favourite of theirs for dinner… Raglan Road.

We met up with them in the lobby bang on our reservation time, 7pm. We were kept waiting aaaaaages though but i didn’t realise at the time that was because Randy had requested a specific table right in the front.

We had a great time! The dancers were wonderful. There were dancers and a band who took it in turns to perform. TBH I could have done without the musicians and just watched more dancing but then I do love me some dancing 😜 Sy and I go to ballroom and Latin lessons at home.

While we waited for our food to arrive we were brought out some soda bread to snack on.

I was still poorly so I didn’t order a main meal but instead went for some truffle fries. Omg they were AMAZING! I want to go back there just to have some more… I’m drooling just thinking about them! 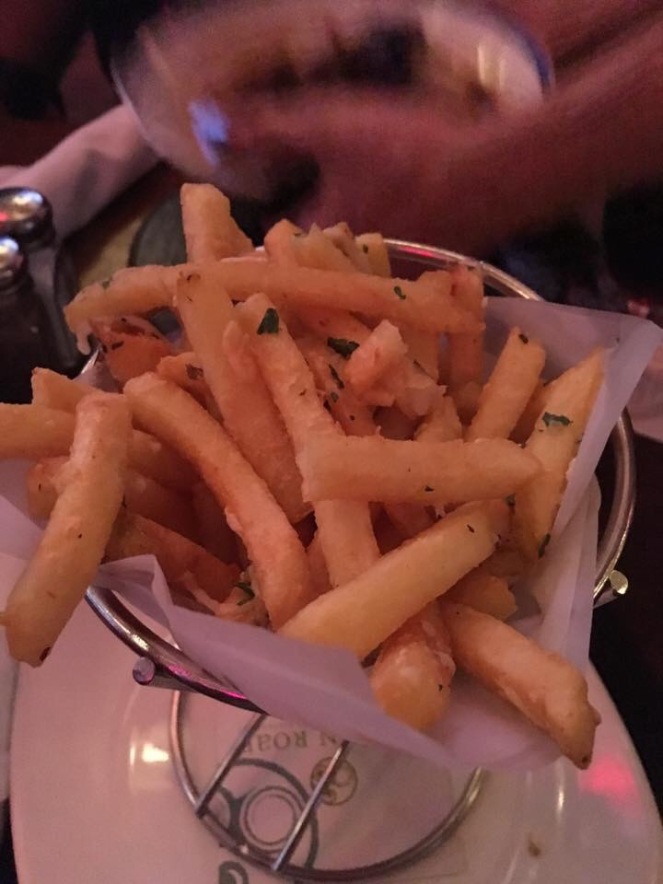 Sy went for the duck which he said was excellent. 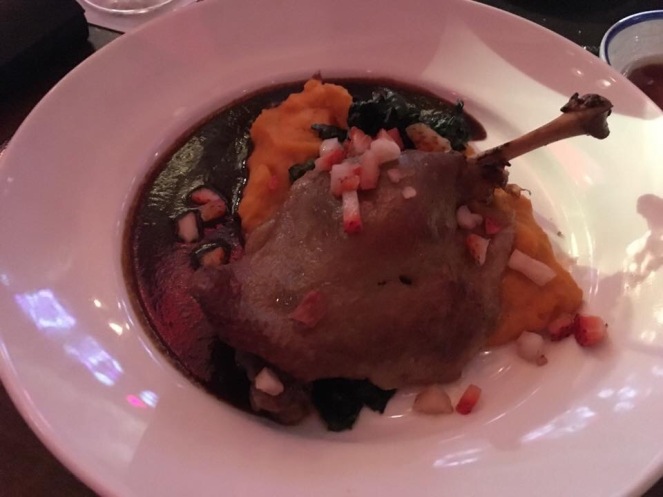 We decided to skip desserts as it was our last evening and we wanted to head to Magic Kingdom!! Randy and Marranda came too ❤️

We couldn’t go without getting a picture with the girls though. 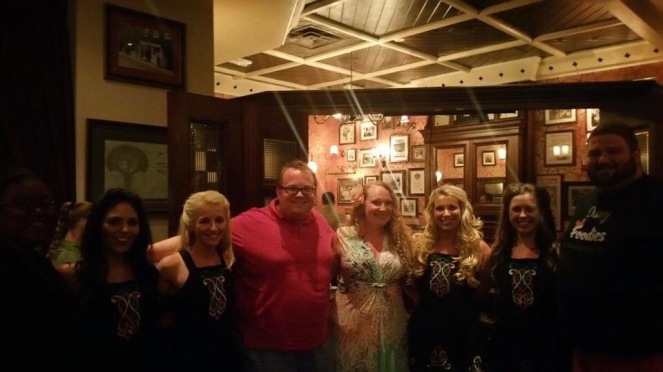 We parked up and made our way into the Park. Ali was also in MK tonight along with our friend Nicole we had met up with on May the 4th.

It was pretty late by the time we got there so there wasn’t much time for many rides. We made our way into liberty square and caught up with Ali. We had a little debate about what we all would like to do. Randy, Marranda and Sy decided they wanted to ride Big Thunder Mountain, Ali and I wanted to see Celebrate the Magic as we hadn’t managed to see it yet and we wanted to try and catch Wishes. So we split up for a little bit.

Ali and I were sat in front of the Hall of Presidents just as Wishes started so we stayed put to watch it from there. Definitely what you’d call an obstructed view but there was no one around and we could sit in peace to watch. I may have shed a tear at having to go home the next day… in fact I think Ali might have too 🙈

Afterwards we made our way towards the castle for Celebrate the Magic and found a really good spot – it was pretty quiet tonight in magic kingdom. The others arrived just before it started so they didn’t miss out. They came back with Dole Whip having been denied dessert in Raglan road, Sy didn’t bring me one so I just ate some of his – that will teach him 😂

Once it had finished we went to try and ride jungle cruise but sadly they had already closed it so we went on pirates instead, we bumped into Nicola just outside so she came on with us. Ali got wet again 😂🙈 poor Ali! She must attract water hahahaha

It was then time for the Main Street Electrical Parade. We got a spot in Frontierland and we were the only people around for miles 🙈 okay that might be a slight exaggeration but there was no one for about 10 meters either side of us. It really was soooo quiet. 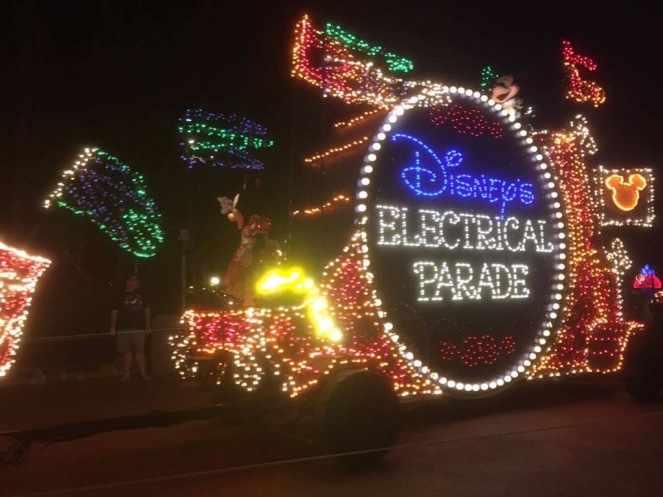 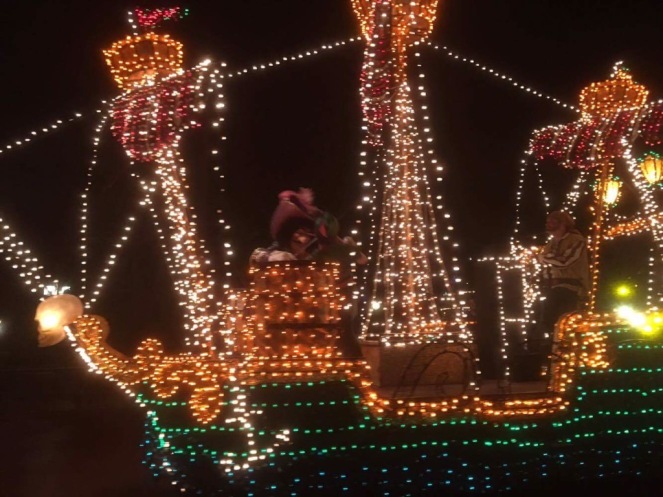 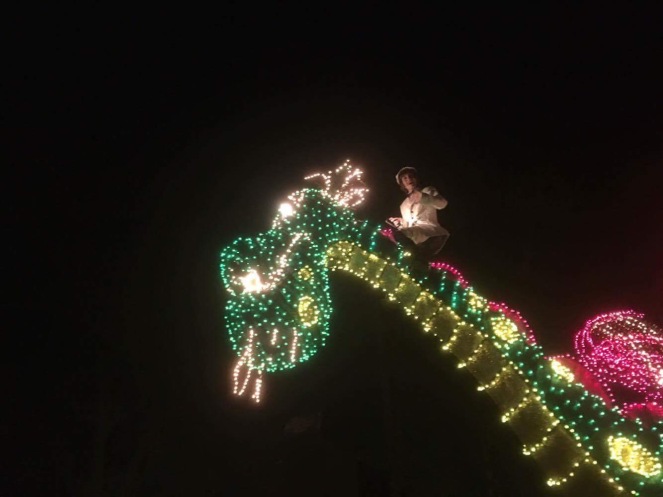 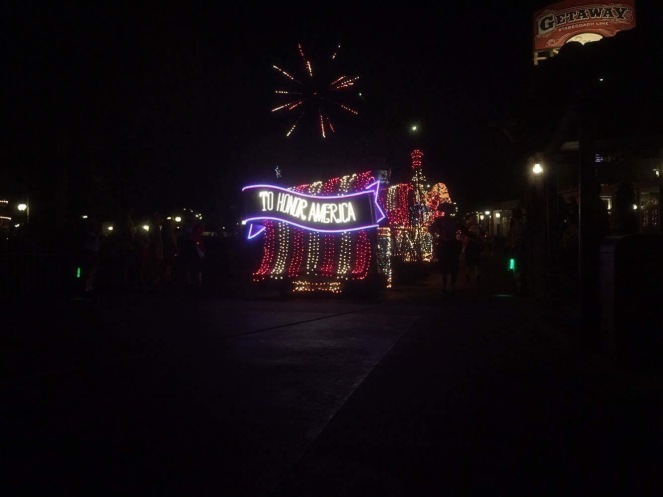 The park was closed now so we needed to make our way out. We stopped to get a couple of pictures on Main Street on the way, not wanting our evening to come to an end. It had been such a wonderful trip, I just wasn’t ready to go home to reality. 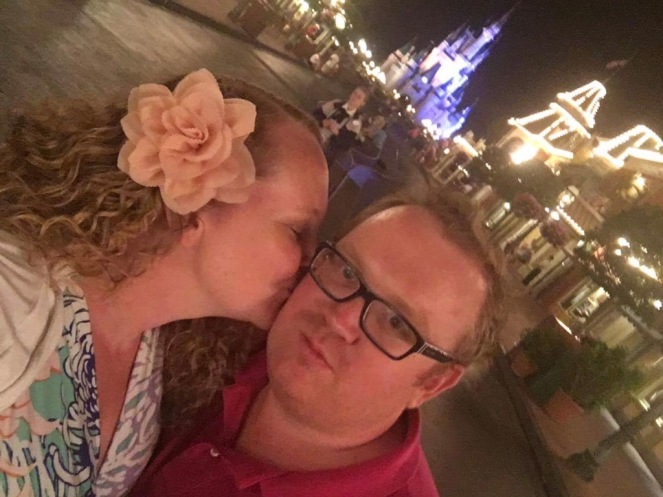 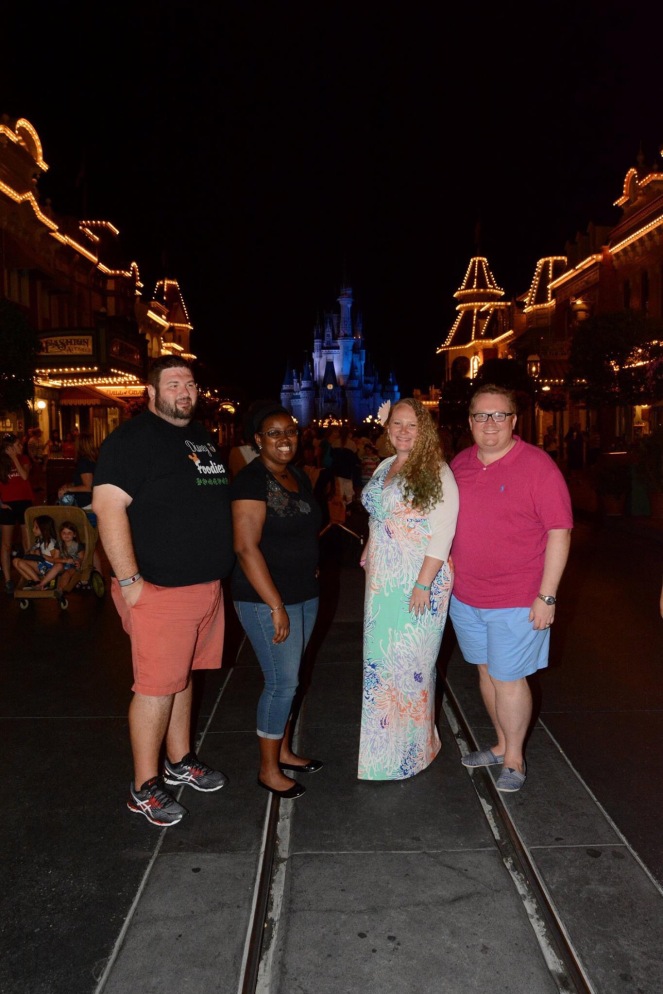 We said a sad goodbye out the front of Magic kingdom to our friends and made our way back to the car, and back to the Boardwalk to do some packing…