The day I came down with the lurgy.

I had been up all night on and off so just before midnight I cancelled our breakfast reservation at tusker house think we’d probably not make it – and I was right.

I stayed in bed most of the morning and had thought I’d be there all day but thanks to our lovely friend Carrie (who lives here) she sent me a list of drugs to help so Simon and Anne went off to Walgreens to get me dosed up.

Our parents had decided to head to Hollywood studios and made fast passes for lots of shows so I went along too – I can cope with shows all day, just no big rides!

We managed a return time for Toy Story Mania, my score was pretty pitiful but given how poorly I was feeling I’m not too ashamed of it! Simon got the top score of the hour as usual.

We also watched Indiana Jones (I’m blaming Cliff for that one!) and Frozen.

Everyone else had a fast pass for Star Tours but I can’t even do that when I’m well let along feeling crap!

We stopped at backlot express for lunch with everyone getting chicken sandwiches to share (except me and Simon as I wasn’t feeling like food, I got some kids apple slices instead).

While we were inside Frozen the heavens opened. Everyone else still had their star tours fast pass so I decided to go on ahead and hop on the bus back to the hotel. Really needed a bit of rest and to get my feet up and happy that they were able to enjoy the park a bit longer without me holding everyone back. They also went to see Muppetvision, love that show so I’ll make Simon do it again with me in our last week 😉

Bus seemed to take ages, looked like a lot of traffic on the road so no wonder. Was back at the hotel by 4:20.

Decided that the massive jacuzzi tub in our bathroom would be a great way to unwind and relax… so I ran the bath and hopped in. Simon and my parents arrived back about 5. Anne and Cliff stayed to ride star tours a few more times as Anne loved it – they rode it 5 times in a row as there was no line!! Anne would have gone again only Cliff was feeling sick 😆

Took a quick pic before the bath as I’d had no pictures and was wearing my new top that our friends Rob and Rachel had made for me for my birthday! Another Fairytale sparkle masterpiece! 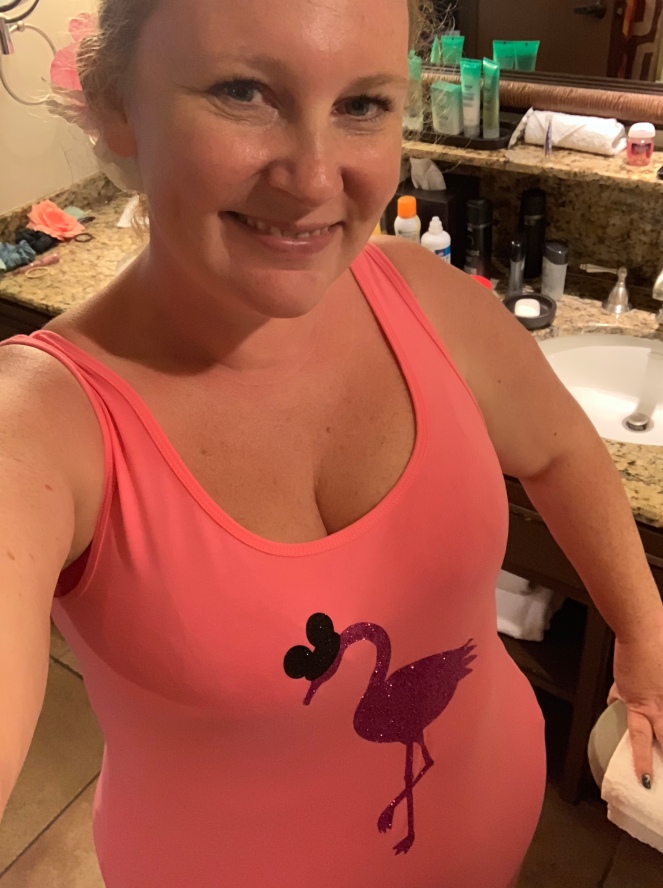 Simon found me in this position…

Out of the bath and Simon’s parents were home about 6-6:30. We had discussed about going to Longhorns but I was feeling too pants so I suggested they go and eat and bring me takeaway when they leave, but no one wanted to do that so we all had take out in the room. I slept from the moment they went out till they got back. Lovely Anne did all our washing and ironing while I was sleeping – should go nap more often!!

The guys came back about 9:30 (they left at 8 but it was super busy in there). The food was good but honestly I couldn’t enjoy it, only managed a few bites 😦 gutted as it’s my fave – Parmesan chicken! I’ve saved what’s left in the fridge so hopefully I’ll feel up to eating it later.