Well the time had come, we must leave our amazing room and ship 😭 Having had this booked for the best part of 2 years, it was hard saying goodbye. There may have been a few tears, but Simon managed to hold it together after a few cuddles from me 😉

Simon went to the lounge to give the concierge the box of chocolates we had forgotten to give them the night before – good job too as our card hadn’t worked so he had to quickly sort that out while I packed up the last few bits.

Our breakfast was a reasonable 8:30 (some were before 7am!) so we had a little time to get sorted. We made our way down at 8:15 and were greeted by a huge line of people waiting to go in 😮 being British we joined it (we just love a queue 😆) and before long we were being shown inside. Abby, Jan and JoAnn were all missing breakfast today as their bus to Disney was leaving at 9am. So it was just us, our parents and Dee and Christy. We offered to drive Dee and Christy to Disney as their flight wasn’t until late tonight and they were gonna be at the airport all day, least this way they could hang at Disney springs for a few hours.

Breakfast was good, again we were in Animators Palette. As I said before, I’m not a huge breakfast person. I did order a breakfast but only made a tiny dent in it 🙈 I did have 2 apple pastries though 😉 (in my defence they were really small haha).

Breakfast finished and lots of goodbyes to our amazing server. We exchanged facebook #moderndayemail and hugged him goodbye. He played a really big part in what made our cruise amazing. We named him on the feedback form so I hope he gets some recognition from Disney.

It was then time to leave the ship. We got off together as a group, we arrive in the baggage hall, turn around and there’s no Anne and Cliff. And no sign of them. They also don’t have phones that work here

We wait. And we wait. And we wait. Anxiety levels are pretty high by now. What had happened? Eventually we find someone who radio called to find out what the issue was as there was no one left to get off the ship and the hall was empty 😨 turns out they had the same issue with their credit card but didn’t find out till they were off the ship scanning their room keys. They had to go back onto the ship and sort it all out but had no way to let us know. Least we knew what the problem was! Soon they were joining us and we were on our way to Alamo to pick up our 2 hire cars.

We were on our way to Orlando around 10:30. A bit later than planned but we were on our way at least. We drove to Old Key West to get the rents sorted, they had 1 night here before flying home 😭 we then separated with them going straight to AK while made our way to the Grand Floridian villas to leave our baggage. We were still early so no rooms were ready yet. 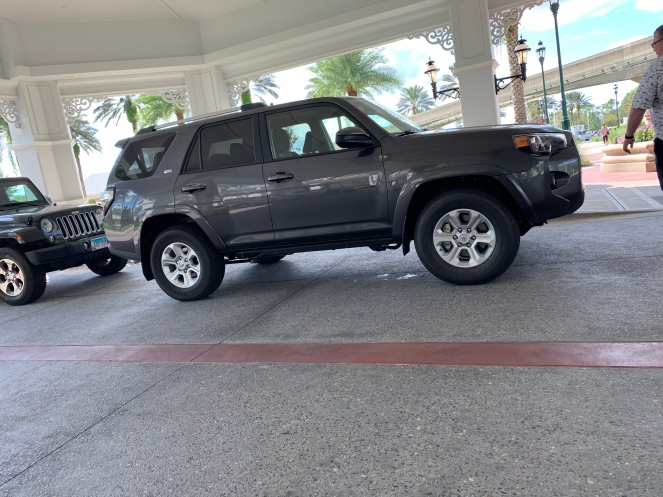 We also left Dee and Christy at the Grand as they wanted to check out their new purchase over at Copper Creek (Welcome home!). What can I say? A week away on the Fantasy with me singing the praises of DVC ownership…

Went on over to AK to find the parentals, they had made it as far as Nomad Lounge. While sat there having some nibbles I was feeling really crap and struggling to swallow. I’d still not shaken whatever was wrong with me and it was time I needed to admit defeat and go see someone. I wasn’t getting better, my days consisted of alternating pain killers and it was getting me down. I made an appointment while sat there at the local centra care for an hour later. We left the parents with a list of their fast passes and Simon took me to see the doc. We were half hour early but went in on the off chance they might see me a little early – fat chance lol. We were there over an hour before they saw me. The dr took one look and said it’s tonsillitis. I had them out as a child but apparently they missed a bit? He wrote out a prescription after about 25 minutes of me sitting in a room with no idea what was going on. They didn’t have the meds there so sent me to CVS across the road inside Target. I paid the $209 for the appointment and surprisingly only had to pay $16 for the antibiotics and steroids.

Back in the car and back to AK, arriving at 4:45 (we left at 2 and the centra care was 1.5 miles away), I’d been in touch with mum who said they were watching the 5pm Up show, we wouldn’t make it in time so we arranged to meet by Flight of passage at 5:30. This meant Simon could power nap in the car (he might have also fallen asleep in the drs 🙈). What can we say? Cruising is hard work 😉

Flight of passage time was upon us, I was a little nervous about riding it as I was still really swaying from being on the ship. I intended to chicken out at the last second but for some reason decided to do it (I feel I need to point out that I’m not scared, I just get a bit motion sick), I was totally fine though. Everyone absolutely LOVED it! Anne said it was her new favourite ride.

It was then dinnertime so we hot footed over to yak and yeti. If you don’t have a Landry card yet, you really need one! The lady in front of me was 45 minutes early for her reservation and told there would be no chance for an early seating, family behind me told 90 minutes wait for a table on a walk in, one flash of the card and we were seated within five minutes. Arguably the best fastpass in AK 😜

I dunno what it is about this place but the service is always super slow, don’t plan to be here and then rush elsewhere – don’t make the mistake we did haha!

We were all starving so we got some apps while we waited for our mains, we got a dim sum basket and pot stickers. Yumm! There’s a new specials menu since we were last here, Simon decided he was going for the Asian tacos while I went for my usual sweet and sour chicken with fried rice. It was SO GOOD. We had no time for dessert so I got a mango pie to go 😍 there’s just no way I’m going in yak and yeti and coming out with no pie – I would be ashamed of my life choices 😆

We paid up and ran back to the cars to head straight to top of the world for fireworks. We had arranged to meet people we’d cruised with and also my Dapper ladies who had been in MK for the day. Though it ended up being just the girls who came. Oh and the mango pie was devoured before we’d ever left the AK car park 😉 I did have to share some with Simon (had I known this I might have made him get his own).

My fave server Ryan was working tonight 😍 it was totally rammed up there. We stood outside till the fireworks and then made our way inside (our parents left at this point as they were shattered). Ryan the cutie had grabbed us a table when a family had left – he’s a total babe! This is what happens when you become a creature of habit and go to the same places all the time, you get to know people haha. He’s is super amazing though, I’m always sad if I go and it’s his day off 😭

The girls hadn’t eaten since lunch so got a few apps, I was still full from all that mango pie 😍

We stayed till about 10:30 and then had to admit defeat and head home – luckily we didn’t have far to go. As we hadn’t been to our room yet our magic bands wouldn’t work on the front door of the building – after 11pm it’s locked to guests only, you have to use your band just to get into the building. Luckily there was a phone so I called and the nice guy on the other end sorted it for me.

When we got to our room the door was open

not sure what that was about – but as we had no stuff in we weren’t too bothered. Turned out to be quite a problem though and ended up with having people working on the door for a few days.

We called bell service to grab our bags, half in long term while we were on the cruise and half we dropped off this morning. We then realised we had nothing but a 50 note. And of course muggins here had to go over and get it changed while Simon sat with his feet up in the room. It’s ok dear, I’m not sick or anything 🙄 so I walk over to the main building valet and get some change. I hung around a bit at long term storage to offer my assistance to find our things (and hopefully hope on the little golf buggy to bring me back #forwardthinking ) but Simon messaged to say the guy was there so I legged it back. When I arrived I found he only had our things from that day, none of the long term stuff 🤦🏼‍♀️ he was soon back with all of that though and we were some $$ lighter.

We couldn’t face unpacking properly so we dug out some pj’s and outfits to wear the next day and climbed into bed around midnight.

Tomorrow, the magic kingdom! And our parents last day 😭