Managed to sleep through till 4:30 when Sy’s snoring woke me up, nothing a sharp dig to the ribs with the elbows couldn’t fix though hehehe I then went back to sleep till 7am. I would have slept longer but Sy was stroking my face and gazing at me… half of me went awwwwww that is so sweet! the other half went WHY ON EARTH HAVE YOU WOKEN ME UP I MUST KILL YOU NOW!!! 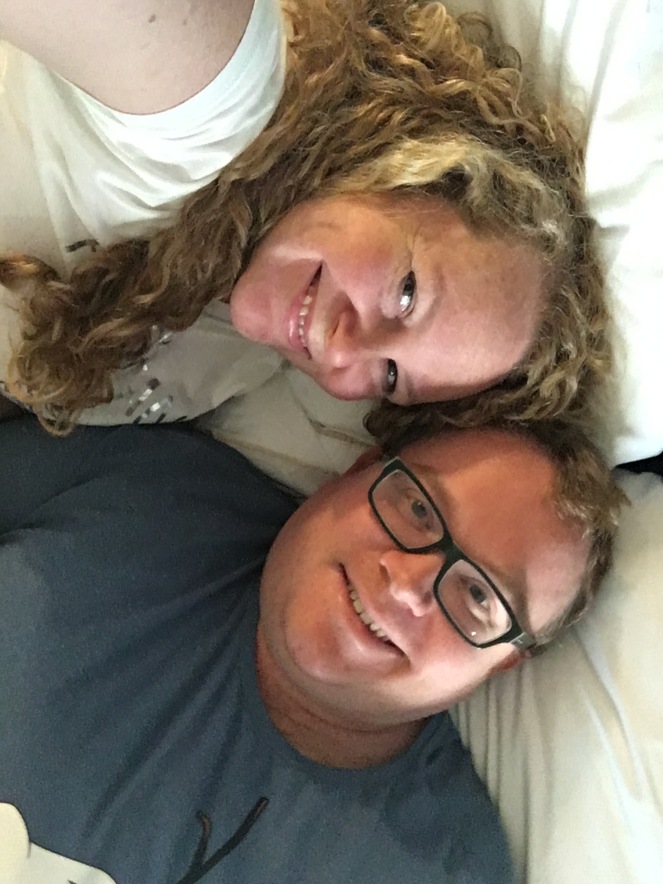 I don’t look too annoyed there, but then how could I be?! It was our first day in DISNEY!!!

We packed up what little we had unpacked and loaded up the car. This morning we had somewhere rather special to be… Animal kingdom lodge CLUB LEVEL!! Old key west was lovely don’t get me wrong, but we wanted to check in as early as possible to take full advantage of the club lounge. 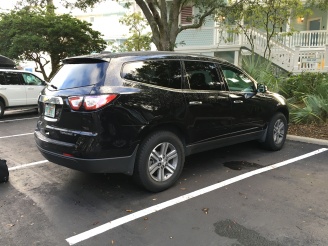 We made our way to akl and gave our name at the gate. I’ve seen people checking into club level before, they are greeted as they arrive and taken up there personally to check in. There was none of this. I must admit, I was a teensy bit gutted. We unloaded the bags with the help of the bellman and valet parked the car before heading inside. I stood for a moment looking around for someone to greet us and take us upstairs but there was no one 😦 so off we went to the check in desk. We were called forward right away and I gave our names, well the lady asked me to wait there and before we knew it the manager came out to shake our hands and personally take us upstairs! He sat us at the desk with Andrea to check us in and insisted on getting us some drinks, Sy had a mimosa (or what they do like it as they don’t technically do it anymore) and I went for a Diet Coke. I wrote in my notes how awesome the CM was (this was before I had caught her name) ❤

While we were sat there a lady came to say hello to us, we had spoken on the Facebook group, they were checking out that day as we checked in. Her name was Claire but didn’t get her hubby’s name. Was nice to say hello!

Our room was of course not ready yet, sadly we had a pool view (I am not a fan of them in akl as they are noisy!). No one was checking out from the other side of the hotel today, we could have switched the next day but I said not to bother.

We grabbed some breakfast in the lounge and then made our way to the Magic Kingdom! It felt a little chilly still, I wasn’t used to this in Florida. 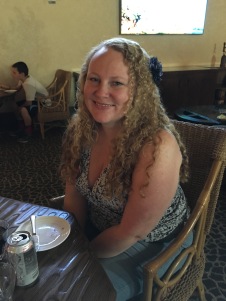 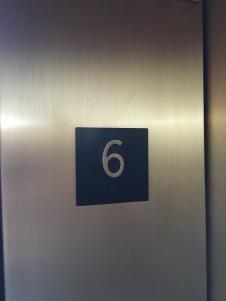 Before getting into the parks we needed to pick up our annual passes, we bought them just before the change in prices but hadn’t collected them – I was pleased to see we got the platinum pass which included the free memory maker! We also got a new tables in wonderland card and had our old water park non expiry passes changed to RFID cards. Took about an hour in total. Yikes.

First stop was of course a few photopass pictures on Main Street. 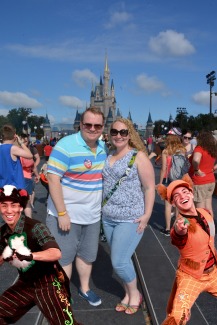 We wandered about soaking up the atmosphere, we had a bit of time to kill before our Fastpass at splash mountain.

We got red carded at the first ride of the trip. Of course we had to take a picture lol

We got a bit wet…

We went to get some chicken waffle sandwiches and on the way we saw there was no wait at all to meet Tiana! So of course we had to go in. I loved all the little princess and the frog details inside. 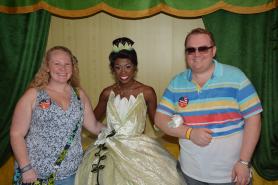 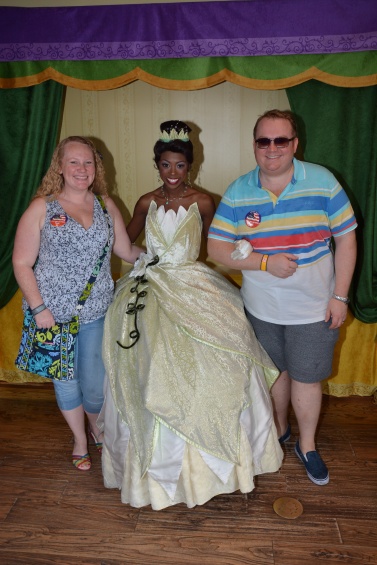 I am not a fan of the pictures – half wet hair is clearly not a good look for me. Tiana was admiring our ‘Its Orlando Time’ badges.

We then went to grab our chicken waffles. I wouldn’t eat in the sleepy hollow dining area cause of the wasps so we walked towards Adventureland till we found some hidden benches with no one sat on them.

Just as we were finishing up I could hear the move it, shake it, parade coming so of course we stuffed the last of them down and ran to the hub area. We managed to get a spot before it got there. I did lots of dancing while Sy periscoped it for everyone to laugh at lol 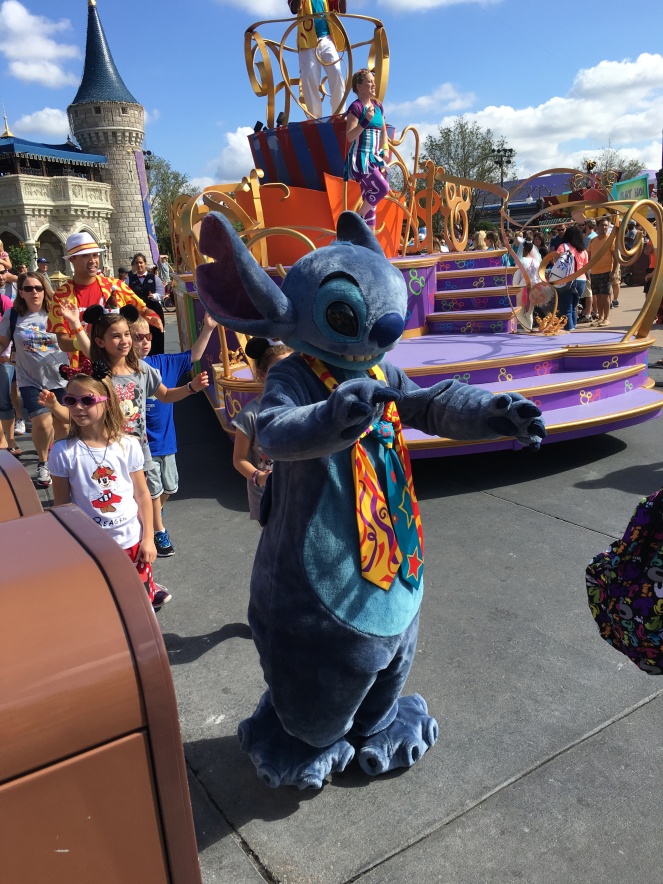 It was getting really damn hot now and we were silly and hadn’t put any sun cream on so we had to call time and head back to the resort.

We stopped at the end of Main Street to watch the Dapper Dans, they looked super cute in their holiday outfits!

It was 2pm by the time we arrived back at the resort. the room wasn’t quite ready yet so we grabbed some snacks and drinks and sat in the lounge. We spent more time chatting with Andrea, she even talked us into giving her a quick demo of the Viennese waltz. Only cause there was no one else there though!

We didn’t have to wait long for the room to be ready, I got an email at 2:30 with the room number! Woohoo! We were literally the closest room possible to the lounge.

We called down for the baggage and mentioned that there should be some sort of parcel for us left behind from our friend Ali who left the week before. They found it! And OMG Ali had left us sooooo much stuff! Thank you Ali.

We unpacked a bit and had showers before going to the lounge for afternoon tea…. I was so excited, anyone who knows me will know how much I love afternoon tea. I was greeted with cinnamon scones. I mean seriously?!?! What. The. Heck. Those are NOT scones. Humph. There were chocolate cakes with peanut butter icing and rice crispy cakes. Rubbish. Ah well, saved on calories lol.

We headed back to the room and got ready for dinner at be our guest.

We were a bit late parking so we went straight to bay lake tower as we would be going to the lounge for the fireworks, we explained our plans and parking was no problem.

We hot footed it over to Be Our Guest and met up with Rachel. We checked in and got a couple of pics while we waited. 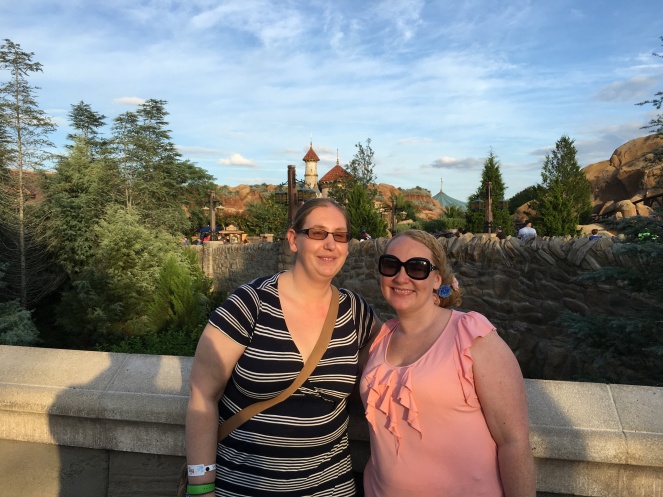 We didn’t have to wait long before being taken inside, Rachel held Lumiere (gotta admit I found the whole who wants to carry him in a bit weird lol).

We sat in the rose gallery, our server was Shelly and she was amazing, so friendly! We ended up swapping Facebook info.

We got breads to start which were lovely. I went for chicken but substituted the cassoulet for fries, Shelly said she’s not had a single person who’s ordered it like it yet and they were looking to change the menu again – let’s hope they keep the chicken on there! Sy had scallops and shrimp. Both were absolutely delicious!! Beast came by to say hello while we were eating. 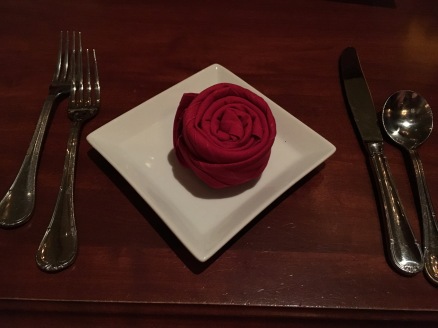 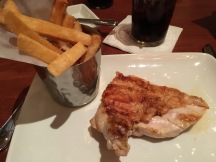 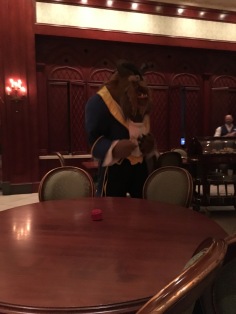 I was too full so decided to skip dessert while Rachel ordered the strawberry cupcake (I think, I don’t have a picture) and Sy went for the grey stuff brownie. He said the lunchtime cupcake is way nicer than the brownie. Shelly said she couldn’t see me not have anything so she brought me some grey stuff to try. How sweet?! Unfortunately I am not an Oreo fan so never actually wanted to try the grey stuff

but I have to say I was surprised in that I loved it! 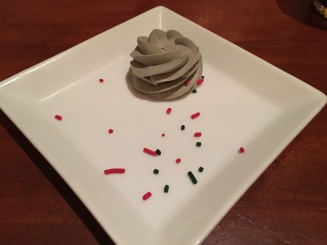 Bill paid we went for a look at the Christmas decorations in the main hall. The tree was amazing! I loved the ornaments. 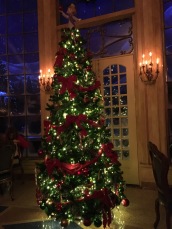 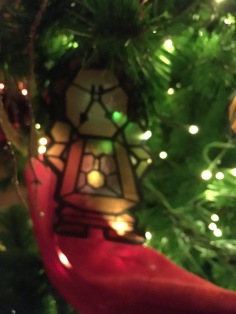 We went to say hello to the Beast, Sy did a weird curtesy thing though he swears it was a bow, beast thought it was very funny! (As did I hahahahaha) 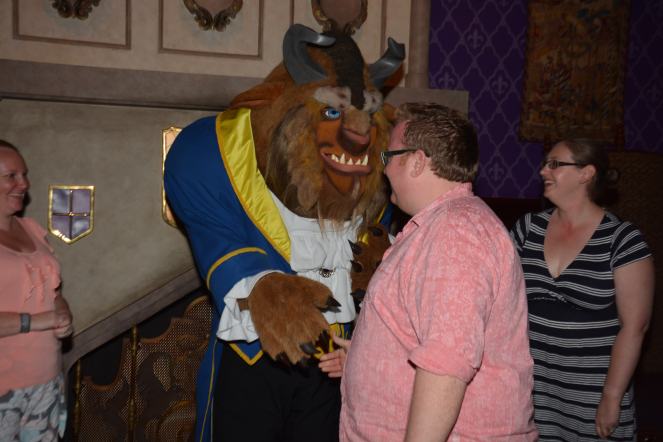 We stopped to get a picture with the mosaic though I’m not keen on the lighting here, seriously Disney sort it out lol how can anyone look good in these pictures hahaha 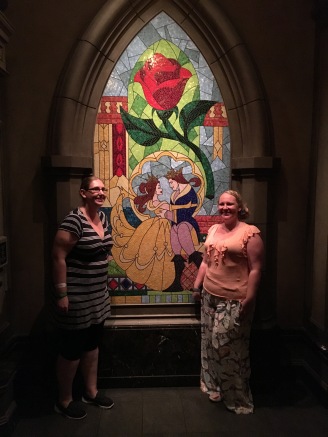 It was a party night which Rachel had tickets for so we had to say goodbye and head out of the park.

On the way out I spotted a girl from a Facebook page I’m on so we stopped to say hello for a few mins, but aware it was almost 7pm and the party was about to start we couldn’t chat for long.

Out front we hopped on the monorail over to the contemporary. We decided to have a quick mooch round the shop on the way to the lounge.

Boys and their toys…. 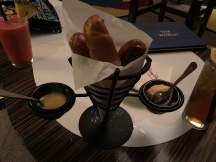 And before long Lauren and Bob messaged to say they were downstairs. We knew each other from the wdwforgrownups forum and we’re now friends on Facebook. 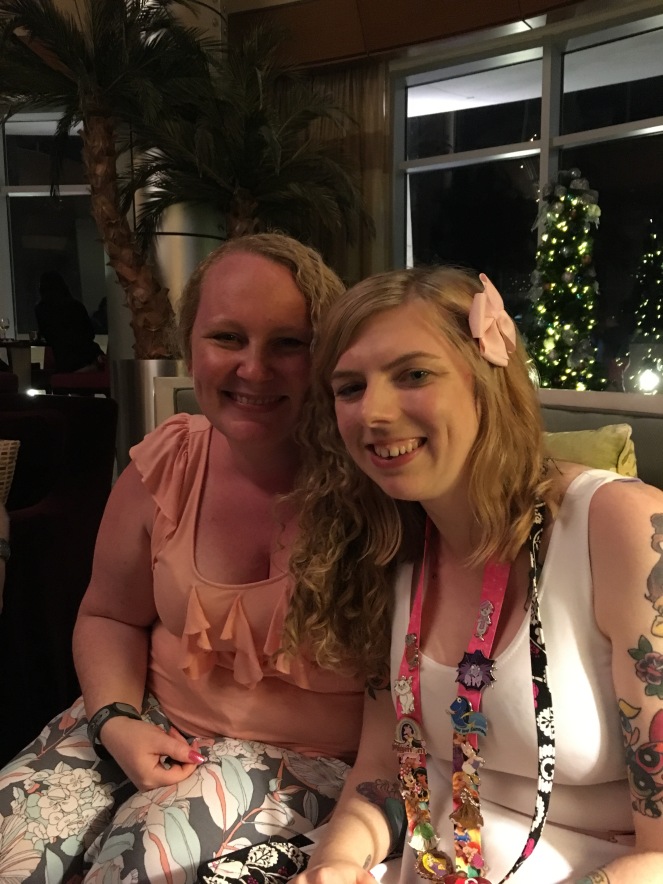 We chatted for about half an hour before Anna and Edwin arrived, they were the couple we met a few years ago on the ferry over to MK from the car park.

We had such a lovely nice chatting! We went out to see the fireworks and I have to say I wasn’t too impressed with Christmas wishes. Definitely the weakest compared to wishes and hallowishes. The finale was quite impressive though with the fireworks going off from all angles. 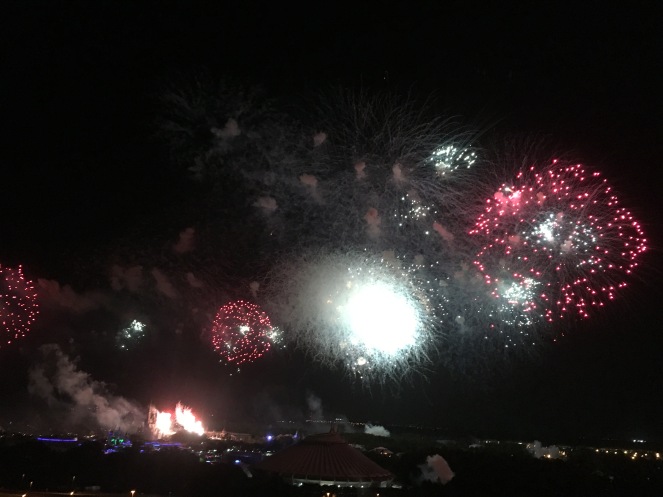 We chatted some more after the fireworks before paying up and heading back to akl.

We arrived to a bit of chaos outside and we soon realised that the Christmas decorations were being delivered and put up!

Anna and Edwin were staying at akl too so as the lounge was now closed we took them up to the seating area and we chatted some more while watching the beginning of the tree going up.

We didn’t last too long before bed was calling, we finally had to call it a day at about 12:30am. Not bad considering we had been up since 7am!

Forgot we had turn down service in club level ❤